This has been a week of sweet celebration for the LGTB community and their allies.  I have been thinking a lot about how far we have come.  After the overturn of Defense of Marriage Act (DOMA) and the remand of Hollingsworth v. Perry (Proposition 8), I went with thousands of others on that Wednesday evening, June 26th, to stand on Castro Street in San Francisco to celebrate these two historic rulings.  As I stood there and looked at the growing crowd of thousands, I remembered another day, June 30, 1986, when I was in the Castro after another historic decision, called Bowers v. Hardwick.  But we were not celebrating, we were angry.  In that case, commonly referred to as the Hardwick decision, the Supreme Court upheld in a 5-4 ruling, the constitutionality of a Georgia sodomy law criminalizing certain sex acts, in private, between consenting adults when applied to homosexuals.  In short, Hardwick allowed states to criminalize consensual intimacy between adult same sex couples. 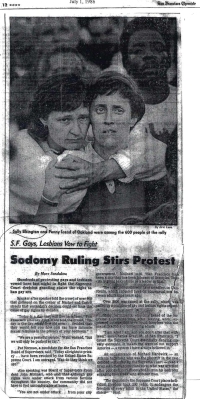 After the 1986 Hardwick decision, I stood at what is now known as Harvey Milk Plaza, with my partner at the time, in total shock, dismay and anger.  I listened to one LGBT civil rights attorney after another, trying to explain what this meant and how the movement could not allow such a homophobic decision to stand and that we, as a community must band together and work even harder to bring fairness and justice to all LGBT people.  I was a “financially challenged” law student at the time, but I felt so strongly about the injustice of this decision, that on October 11, 1987 I traveled across the country to participate in the Second National March on Washington for Lesbian and Gay Rights.  On October 12th, in an act of civil disobedience, I was arrested with hundreds of others, on the steps of the Supreme Court, in protest of the Hardwick decision.  Seventeen years later, that decision was directly overruled by SCOTUS in Lawrence v. Texas.

And now, twenty-seven years later, I was back in the streets, in the Castro District, only this time, there was happiness and celebration.  But, what drew me to celebrate that evening was not just the historic decisions of that morning.  I decided to go to the Castro to celebrate after receiving a phone call in my office from an 85-year old gay man.  I am still not sure where he found my name, but he knew I was a lesbian lawyer and my office was close to where he and his partner lived.  As he stated to me on the phone, “I want you to help me and my 78-year old partner get married”.  I explained to him that he didn’t need an attorneys help to get married, and when the state began to allow the counties to issue marriage licenses, it would be quite easy to get married.  I told him that there would be plenty of information available for all gay people on what to do to get married.  I offered to provide him with that information as it became available.  “No”, he said.  “We want you to be our lawyer and to help us get married”.  With a slight smile and surmising that he and his partner were on a fixed income, I stated that I would be glad to help them, but I would not charge them to do so.  “No”, he said.  “We want to pay you.  We are not looking for free help.  We have been waiting for this day, and we just need a little help to make it happen.”

I immediately was humbled and proud.  I realized, at that very moment, the real significance of these two historic decisions.  It was then I knew that I had to travel over the bridge that evening to revisit that place of my anger and disappointment twenty-seven years earlier.  It was time to celebrate, that my new clients, aged 85 and 78 were going to have their life’s dream come true and I was going to help them.  It doesn’t get any better than that.

One response to “A Week of Celebration for the LGTB Community”